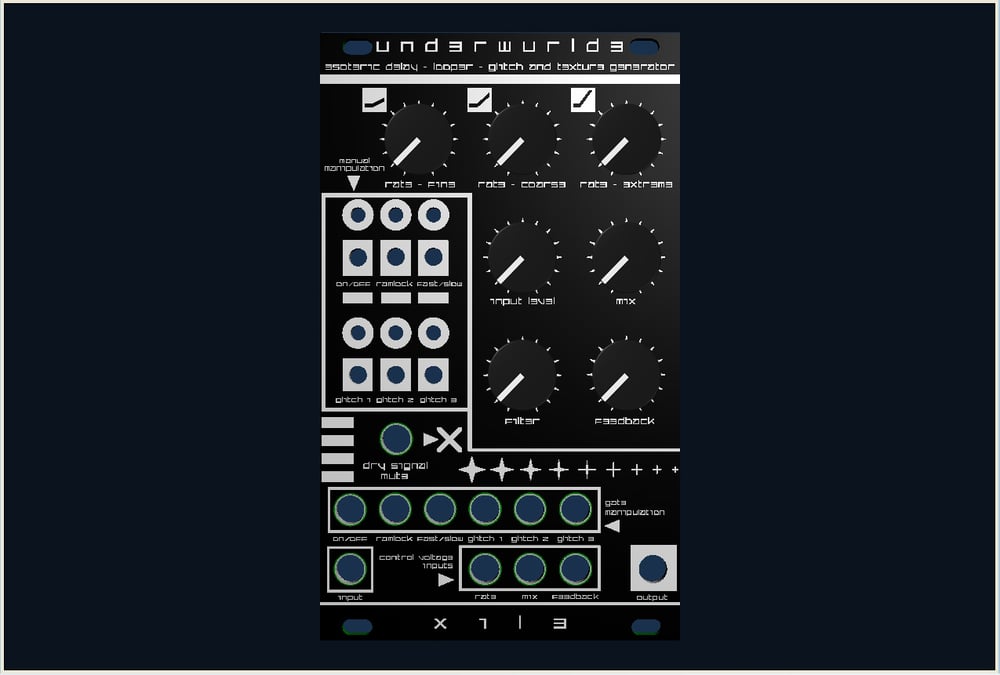 If shipping options aren't available for your country then send me a message and i'll update the postage in order for you to be able to make a purchase. Thanks....

Here's a rough description of the module. For an illustration of this check out the videos down below.

At the core of the module lays a set up of 90s tech which was used in numerous delay pedals and rack units of the era. In vanilla set up it will serve as a good quality tape like echo. A filter control will allow you to set the brightness of repeats and the feedback level can be wound up to self oscillation if desired. The delay times that can be pulled off before signifigant degeneration of the delay loop are impressive. two to three seconds in short delay mode and up to around eight seconds in long mode. The delay times will extend way beyond this by using the extreme rate control, but with these extra long times will come a gradual drop off of delay loop quality and introduction of aliasing and clock noise directly tied to the rate of the loop. This however isn't a bad thing from an experimenters point of view as you're essentially accessing another pallette of obscurity by diving down into these sludgy super slow depths.

The module has a feature called ramlock. This is tied to the delay ram and when active will freeze the contents of the ram. This allows for two things. The first being what is essentially infinite repeats without any gradual drop in quality, the second is that this loop can be used as a texture/drone which can be pitch controlled manually or via the cv input and abused with the glitch array in a none destuctive way. When glitch array is disabled the contents of the ram are left intact. When glitch array is activated while the delay is in normal cycle mode it will pick up corrupted data from the ram and introduce this into the echos. The possibilities for composing unhinged loops by using the ramlock/delay rate and glitch array in real time are vast and you'll likely soon be finding fascinating new sounds to use in your compositions. Drum loops can be grabbed and warped into trash and glitch, keyboards can be ruined and made to suffer the brain damage to their workings caused by circuit bending without having to ever violate the keyboard itself.

The glitch array:
External ram which is used by the delay circuit allows for access to and abuse of the data lines which the two use to communicate in much the same way as a circuit bent keyboard or drum machine might be coaxed into glitch generation. Taking on board the experience gathered over a number of years of pushing the envelope of circuit bending this process has been applied to the module, giving you to access the sorts of sounds these circuit bent instruments create without the need to own one. A dry mute switch allows you to knock out the input signal from the mix while still feeding it into the delay memory. Good for if you want to use the underwulrde as part of an fx loop.

At the back of the module is a header with jumper configuration. By moving these jumpers you can choose three of the eight data lines from the ram to tie to the glitch array. A 4hp strip is set to follow this module which will allow for gating and switching access of all eight data lines simultaneously. This module makes an amazing companion to shard for both the delay facilities in a power electronics/drone context and the capacity to grab and loop an already unhinged sound source and take this even further into abstract chaos.

Delay on/off, ramlock and fast/slow modes are all accessible by gate inputs.
MIx, rate/pitch and feedback are all controlable via cv input.
Rate/pitch isn't 1v/oct. But it does have a good sweep over about four octaves which gives plenty of scope for some interesting behaviour with both the delay and as a looper.

Check out the videos below for an idea of what it can do.
At this moment only the features demo is available. Some live vids will be uploaded soon when i get the time :)

Some feedback from buyers :)

* I wanted to take a moment and send you a note sharing how much I’ve been enjoying my Underwurlde.

Love the character at longer delay times. Looping with sine waves, the Underworld adds a overlay of feathery smooth sandpaper that makes the signal sound like a blast of steam from some machine in a David Lynch movie. At the same time, there’s still enough quality to overlay signals with harmonic relationships intact.

The feed back is well designed, even without engaging ramlock it will hold a signal for a good long period of time. At shorter delays cranking the feedback rewards the user with a nice “bloom” into oscillation.

Really enjoy the trigger inputs, though I wish they were “on when high” gates instead of toggling triggers. Still, it’s probably because I’m more used to the former.

All in all it’s an interesting character delay, and it pairs well with my Harvestman Tyme Sefari. Do let me know if you make an expander of any sort for it.

* Today I got the module (nihil cb mic input). It's so great! Just with the mike + two Underwurldes I can make (black) magic. Thanks for making this possible!